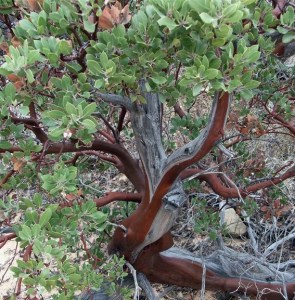 Many people also know the Manzanita Market as “The Little Apple.”  In fact, that is part of our branding and name because “Manzanita” means “little apple” in Spanish and is, in fact, the plant Manzanita, Oregon was named after.  But the  apple refers to the shape and color of the berries on the Manzanita bush, not the fruit we make apple pie with…it’s a plant you can find outside of the market and also in front of the Manzanita Library and growing other places on Laneda St. and around town.  In fact, Manzanita bushes used to grow all over here in the days when the Nehalem Bay area of north Tillamook County was being bought up and parceled into lots and marketed to prospective land buyers. 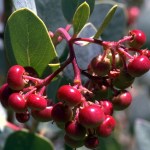 The native Americans used the Manzanita berries and leaves for beverages such as tea, extracts for headaches and lotion for relief from poison oak. The berries (apples) were also dried and pounded into a kind of flour. The beautiful red wood (with the peeling bark) of the Manzanita is commonly sold as a decorative item and also as perches for bird cages as it’s fairly indestructible, even by the most tenacious, large parrot. The tube-shaped flowers of the Manzanita provide food for winter and early spring pollinators and for the resident hummingbirds at a time when few native plants are blooming. 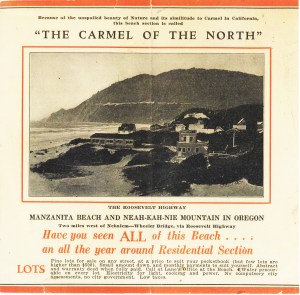 So, who named the city here “Manzanita” anyway?

Obviously, the beautiful local plant that grew in abundance here was the inspiration for the name. A little investigating led to the Manzanita Library and then to the Nehalem Bay Historical Society for answers. Seems that a man named Edmond Lane and his wife Mertie (a lawyer) came here in the late 1800s and purchased much of the land on Neah-Kah-Nie Mountain and surrounding areas near Nehalem Bay. The Lanes vision was to establish a beach resort community, and endeavor that their son Ben later became involved in the development project marketing the area to the public as being “The Carmel of the North”

The Lanes first named the place “Laneda by the sea” but later changed the name to “Manzanita,” and that is how Manzanita, Oregon got its name.